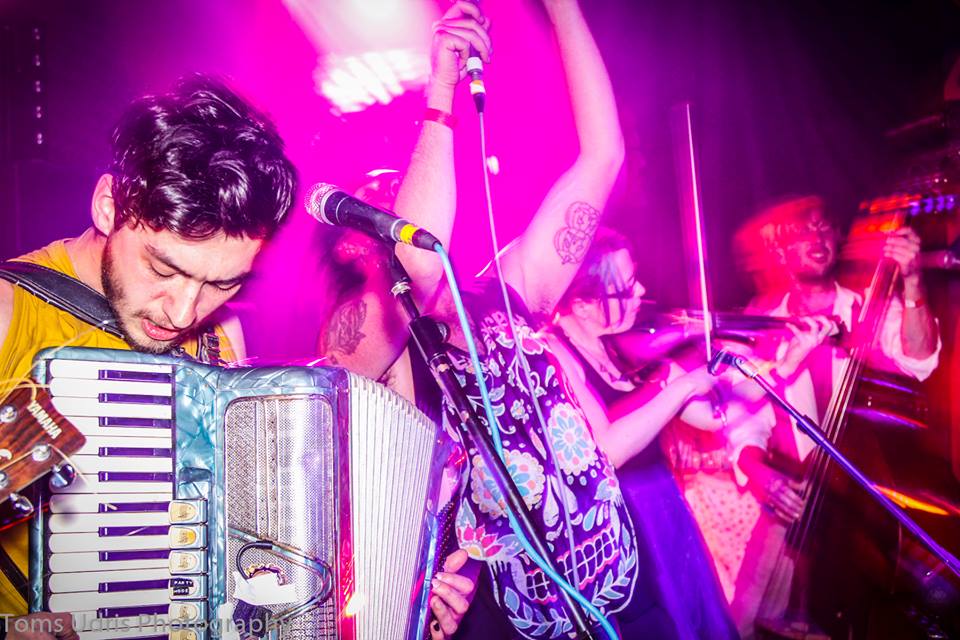 Buffo’s Wake is a twelve-legged beast, hatched in the murky backwater of Brighton, UK. Armed with accordions, violins and a bucket full of gusto they waltz, tango, mosh and kolo their way through a vast array of influences from Eastern European, Balkan and Russian folk, to punk rock and cabaret, telling tales of debauchery, deformity, zombies, incest and anatomy and making audiences dance late into the night in the process.
Musical schizophrenics, drawing from diverse backgrounds ranging from Drum n’ Bass DJ’s to classically trained string players, punks to funk players and poets to showmen, you’re never quite sure what to expect next from Buffo’s Wake. 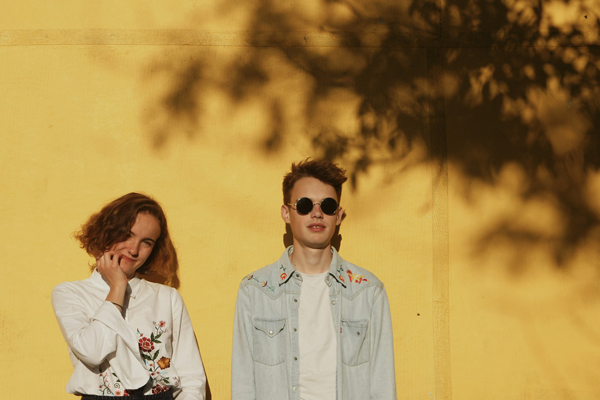 Drawing from alt-country, bluegrass and the canon of an ‘old, weird America’, Rainy Day Woman play sparse, unhurried folk music. After releasing Gallows Green last year, the young duo have been playing their unique songs – complete with desire, betrayal, pub lore and feminist rage – to audiences up and down the country. 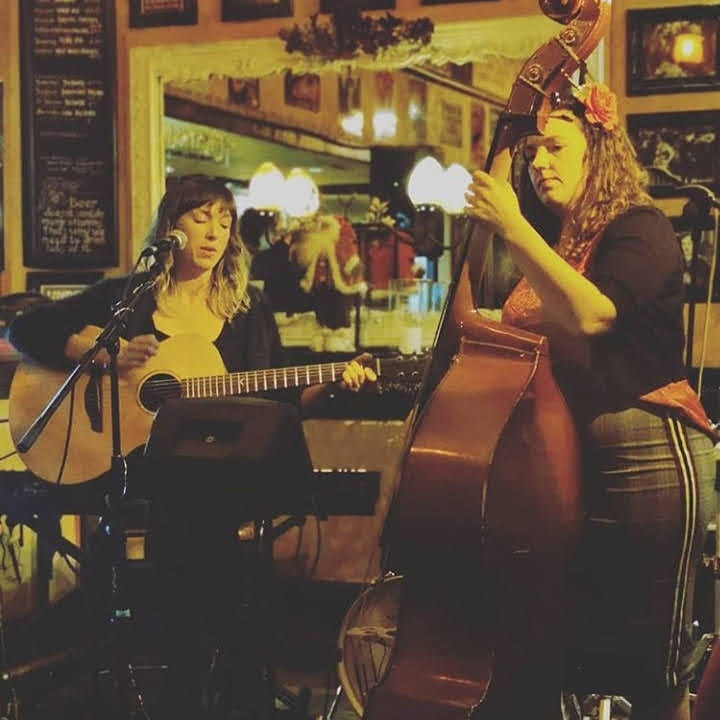 Filthy Dirty South are Lu Davis and Laura Goucher.  They are known locally as lead singers in other bands. Lu in High Shelf Remedy and Laura From Selby and the Dharma Blitz. Both accomplished song writers, the have come together to form this laid back duo to sing jazzy folk songs. Laura with her trusty guitar and Lu with a double bass called Big Dave. 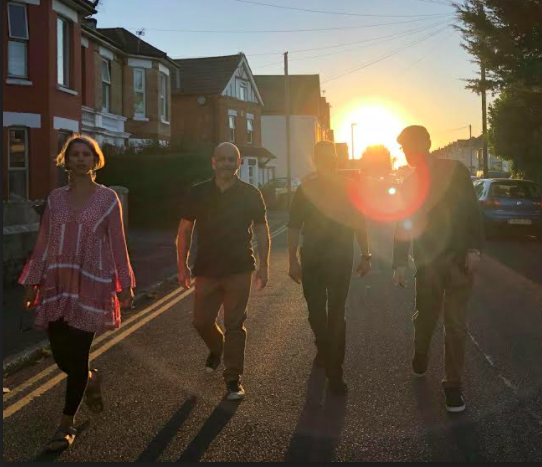 A 5-piece vocal harmony project based out of Bournemouth, UK.
The Vocal Minority want to be different, dropping all instruments to force themselves to create soundscapes with nothing but their voices and focusing on original material to avoid treading on familiar ground, they fuse Folk music with Doo-Wop, Soul and Roots influences. Featuring members of Top-Shelf Remedy, Clams, Cash Converted and The Prairie Dogs they are currently recording their self-titled debut album of original songs to be released later this year. 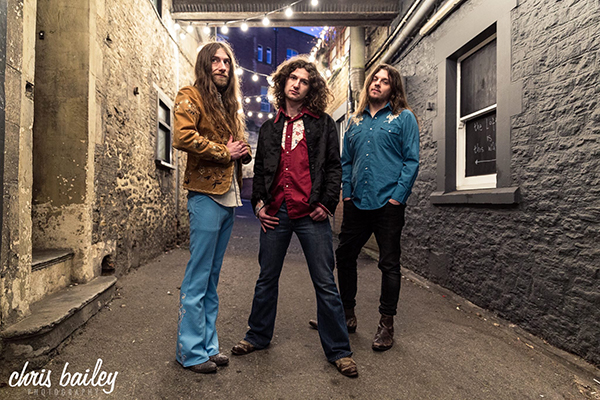 With just an upright bass, two old guitars and a bucketful of aching harmony, THE GOAT ROPER RODEO BAND are preaching ‘Country Blues’ like you never heard… It’s up, it’s down, it’s soft and loud, it’s dark and lonesome too, there’s hurt and shame and some mean old pain but there’s love in what they do! There’s a hint of Gram, a sniff of Dylan and a twist of Waylon’s blues … Simply put, it’s exactly what it says on the tin. 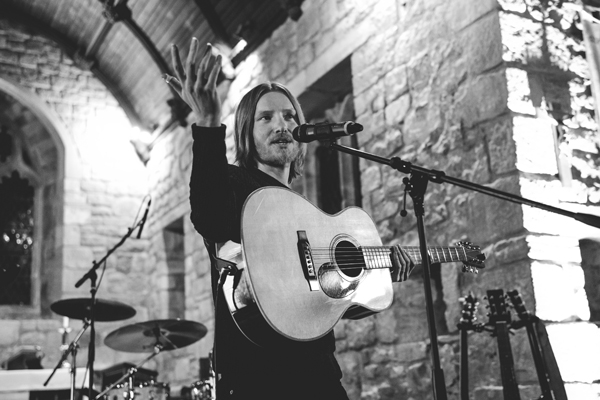 Ben Morgan-Brown is a singer songwriter and accomplished finger style guitarist who is quickly gaining recognition in the UK’s contemporary folk and acoustic scene.
Both his 2017 release Cold Rooms and his 2018 EP Nameless Gold received national airplay, with Nameless Gold being described as “as good as minimalist folk gets…” by Louder Than War and “beautifully sophisticated… with an incredible depth of emotional honesty” by FATEA.
The title track was shortlisted for FATEA’s ‘Song of the Year 2019’ and lead single Ten Years Passing was called “beautifully written, beautifully played… brilliant…” by Tom Robinson of BBC6 Music.
Highlights of 2019 included winning the Purbeck Rising competition at Purbeck Valley Folk Festival, performing at Sark Folk Festival with The Tim Jones Band, and support slots for Reg Meuross and Boo Hewerdine. 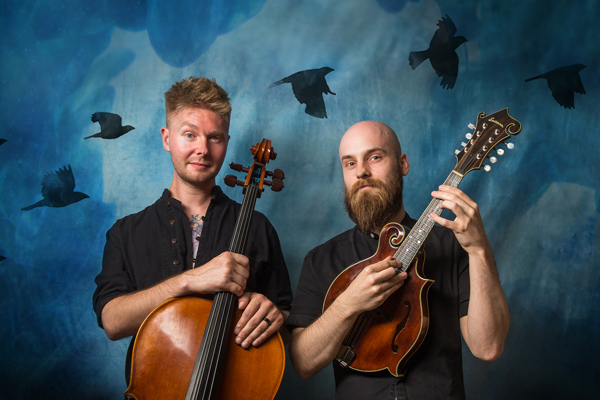 Mystery has largely disappeared from the world; we can put the trolls back under the bridges and remind you not to step into a fairy ring under a full moon! The Last Inklings create music that inspires wonder and intrigue through songwriting, stories and soundscapes.The alt-folk duo is formed of multi-instrumentalists David Hoyland and Leonardo MacKenzie, former members of respected folk trio Kadia. Their experimental sound focusses on cello, mandolin and violin layered with vocal harmonies. Songs are inspired by folklore and the human element of mythology, drawing on narrative influences ranging from Norse myths to the writings of Neil Gaiman, Joseph Campbell and Carl Jung.

Some of the stories may not be entirely true, but they tell a truth just the same. 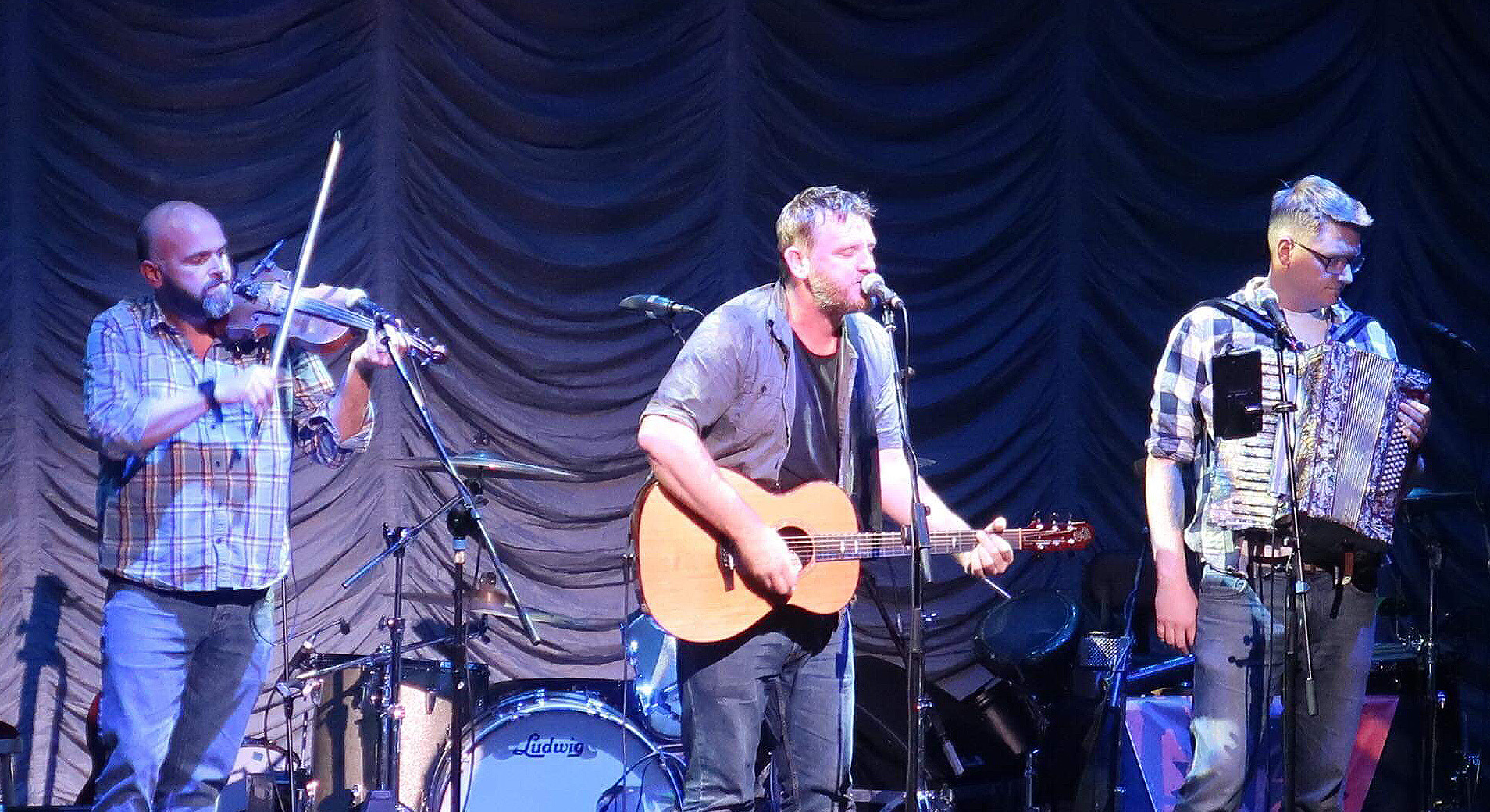 Glastonbury based Nick Parker started gigging in his early teens playing mandolin and singing in folk/rock/skiffle band ‘Why?’, and spent the next 10 years bouncing around on stages at hundreds of venues and festivals around the UK and Europe. In 1998 Nick called it a day with Why? and started guitar band ‘Tobermory’. After various false starts, a few flirtations with industry ‘big’ boys and a few tours in Germany, Tobermory played their last gig in 2004.
In 2010 Nick embarked on a solo career and has since released four full-length albums, 2010’s ‘The King of False Alarms’, 2014’s ‘Angry Pork and the Occasional Bird’, 2017’s ‘Besta Venya’, (tracks from which have been played on various BBC6Music shows) and 2020’s Make Siddowda – Live from Worcester.
Over the years Nick has had the pleasure of sharing the stage with The Wedding Present, Bright Eyes, Frank Turner and Mike Peters among others, and has recently provided tour support for Levellers, Ginger Wildheart & the Sinners, and Skinny Lister.

Nick’s songs are often tongue-in-cheek and cheerful, and on the rare occasion when fun IS poked (usually at himself) it is always with a wry smile and an element of satire.
At Folk on the Quay Nick will be joined by ace fiddle player Benny Wain, and multi-instrumentalist Hare. 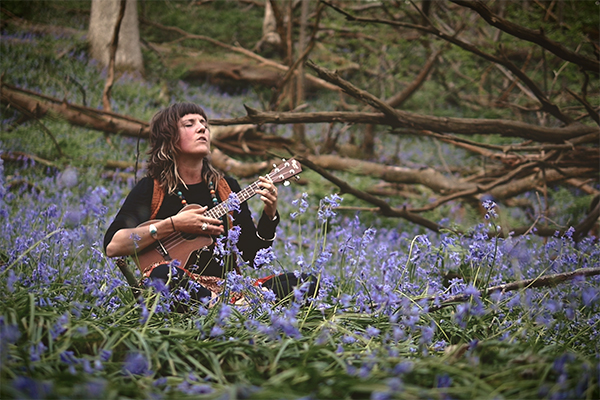 Dorset based singer-songwriter Kitty Stewart, renowned for her quirky and upbeat originals and her favourite musical companion Talula the ukulele, blends a funky fusion of folk, blues and pop with her distinctive style and unique, soulful voice.

Her playful lyrics are charming and heart-warming, telling tales that take you on adventures across the globe and deep into your heart. Weaving messages of peace, equality and greener futures with her witty humour and honesty, Kitty has that special quality that captures her audience and leaves everyone feeling moved, joyful and inspired. 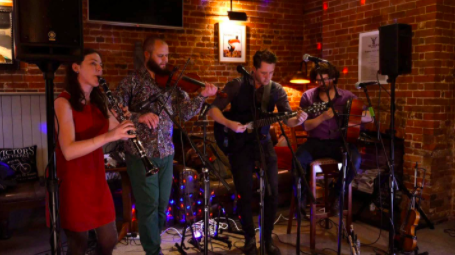 Monkey See Monkey Do met in Southampton’s bustling folk scene, where Aaron and Sam grew up and Helen and Matt didn’t.

After many well-spent evenings at folk music sessions in Hampshire pubs, the current line-up came together in the summer of 2015. Combining vocals with fiddle, guitar, bodhran, clarinet and the occasional squeeze of melodeon, Monkey See Monkey Do take traditional and modern material and make it their own, coining the term ‘folk-ish’ to describe their upbeat sound, which draws on a wealth of folk traditions and influences. 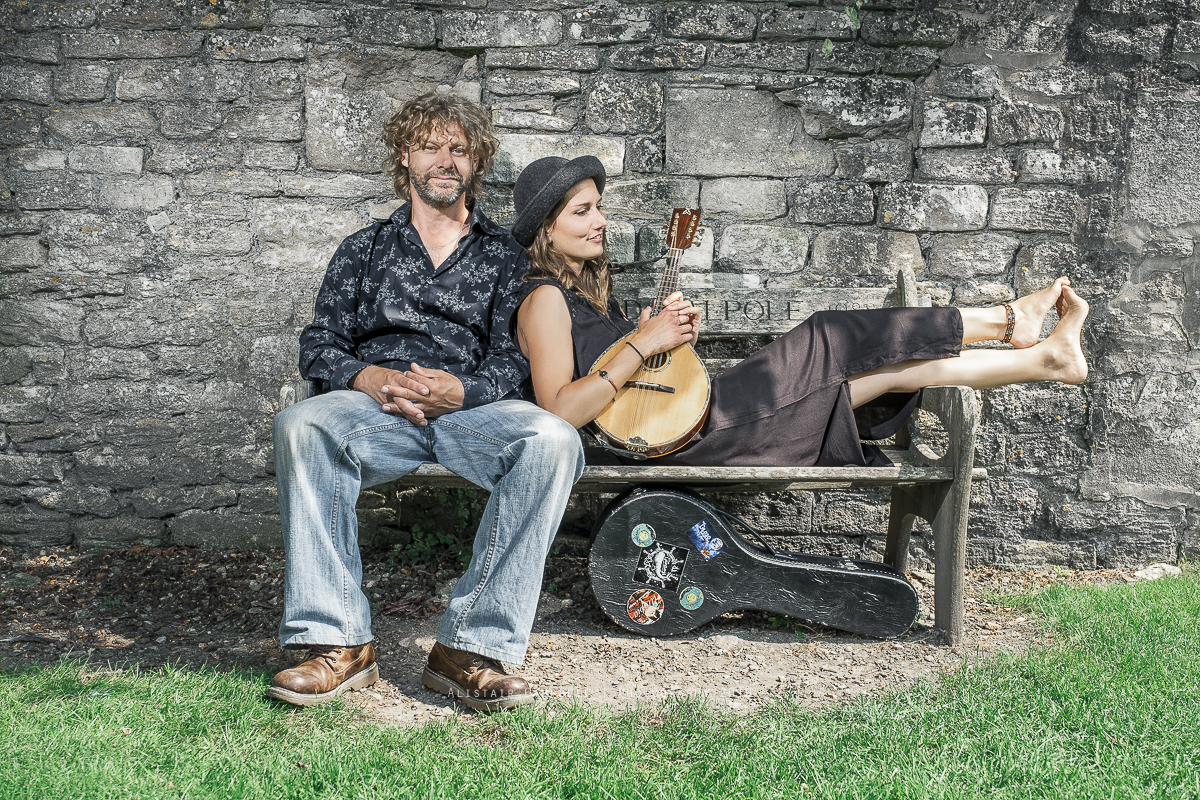 Fly Yeti Fly are the Wiltshire-based acoustic duo Lorna Somerville and Darren Fisher. Blending sensitive vocal harmonies with intricate guitar arrangements, mandolin and harmonica, the duo weave songs and stories from their travels together, with a sound that is reminiscent of the late-’60s folk scene. Now living on their canal boat on the Kennet & Avon canal, their music is heavily influenced by the natural world and life on the water. “Stylish, quirky self-penned indie-folk of the charmingly delicate-but-distinctive variety.” fRoots 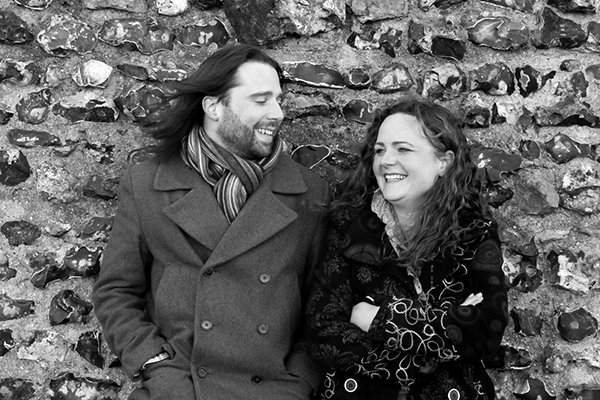 Inspired by traditional and contemporary folk music, Antoine & Owena create their own original blend of folk music that provides a feast for the ears, the heart and the feet. Combining original material with their own take on some traditional songs,this Wiltshire-based duo delivers an eclectic mix of songs and tunes which enthuse and entertain.  With Owena on the fiddle, and Antoine on guitarand bouzouki, together with the use of vocal harmonies, they captivate their audiences with their variety, showmanship, and good humour

Winners of the the Purbeck Rising Competition at Purbeck Valley Folk Festival in 2017, Antoine & Owena have been going from strength to strength and have recently been nominated for the Graham Steel Music Award for best single and best duo of 2019. 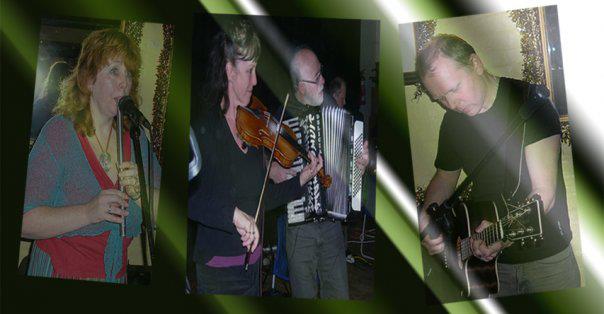 Murphy&#39;s Lore is a well-known and well established Bournemouth based band, performing
traditional and contemporary folk music, from the British Isles.
Our motto is &quot;Ceol agus Craic&quot; which is Gaelic for &quot;Music and Fun&quot;, which is exactly what a ceilidh is
all about. We aim to entertain not educate, so come along and join us for a hooley!
For ‘Folk on the Quay’ the band will be a 3-piece line up, comprising Gill on Fiddle, Andy on
Accordion and Alex on guitar, mandolin and stomp. Noeleen who also plays guitar and Irish Whistles
will be calling the dances for the afternoon.
Despite our small size, we believe we deliver music with oomph and energy, perfect for dancing!

Plus more to come…