Lee (singing cellist) is a huge nerd, he loves graphic novels, archeological excavation (specialising in snails), has nearly two degrees, plays at funerals, mainly for the free sausage rolls and says he can’t drive because he cannot see the colour red at all, which is a great source of amusement for the other lads. Especially when they hide his glasses in red boxes, or replace all the light bulbs with red ones and say there has been a power cut. Lee’s musical influence is classical, he is a diploma qualified Cellist, teaches music in schools and drinks earl grey.

Chris (singing guitarist) gained his Jazzy influence from living and playing in Brazil and taught himself to play the guitar aged 15. Chris is the original founding member of the band, has an accounting degree, he tears up the golf course, literally, cleans up at the poker table, likes Guinness, surfs and whilst he may have written one or two suspect lyrics, he has a real flair for lyric writing and contributes to many of the songs.  Chris’s musical idol is Tommy Emmanuel and has played guitar with him in Basingstoke after a gig and his prized possession is a small guitarlele which has now been signed by Tommy and other legendary guitarists.

David (singing percussionist/octo-ukulele-ist) is becoming the most musically versatile member of the band and is the highly talented multi-instrumentalist. He has a degree in oceanography and loves swimming, surfing and snorkelling. In another life he could have been a water dwelling sponge who lived in a pineapple under the sea. He works with laser beams and sells them as shark modifications to certain evil doctors, loves a good chinese but prefers pizza and has a background of heavy metal drumming and now owns a pair of red flares. 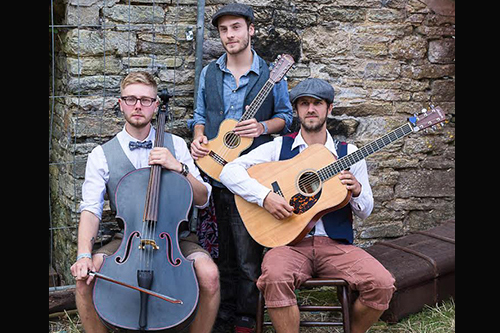