Ranagri (Ran-ag-rye) is a new venture from four musicians who have recently come together to create some exciting new sounds. Consisting of flutes; ethnic flutes; electric harp; bodhran; guitar; bouzouki and vocals, Ranagri fuse worldwide folk music with quality contemporary songwriting, enhanced by virtuosic instrumentals, vibrant rhythms and haunting melodies, all interlaced with vivid storytelling. Nestled between the Wicklow Mountains and Co Carlow lies a stunning area of lush farmland. Cattle graze, small outbuildings lie crumbling, and a pot of tea still heats over the turf fire; a place of untouched natural beauty, of peace and contemplation away from the speed of the city. This is Ranagri. Four London musicians; one traditional Irish player, two classically trained, and one blues singer and guitarist, all with a passion for folk music. A meeting in a pub in Richmond and the story of ‘Ranagri the band’ begins. Donal Rogers (vocals and guitar), Eliza Marshall (flutes/ethnic whistles), Jean Kelly (electric-harp) and Tad Sargent (bodhran and bouzouki) are all very well established within the music industry. They have recorded and performed with many artists including Stevie Wonder, Radiohead, Peter Gabriel, Paloma Faith, Cara Dillon, Luke Daniels, Hans Zimmer, Ennio Morricone, James Horner,The list goes on. However, between them all lies one common thread – the desire to have their own band and play their own music. Donal Rogers grew up between England and Ranagri, where his family have lived for over 300 years. Much of his youth was spent sharing his love of music with his brother, singing the old Irish folk songs of the Clancy’s and the Fureys, whilst setting up their own bands to include influences of blues and rock. Irish harpist Jean Kelly hails from a family of several generations of musicians. She left Ireland to pursue a scholarship at the Royal College of Music, London, but continued to play the music of her homeland. Tad Sargent visited Ireland throughout his childhood, becoming enchanted with traditional Irish music and taking to the bodhran in his later teens. Influenced by musicians such as John Joe Kelly and Damien Quinn, he also loved to play along to Afro Celt Sound System and Michael Jackson. Eliza had a deep connection with Scotland and Africa, taking much inspiration from their culture and music whilst learning the likes of Shostakovich and Bach at the Royal Academy of Music. Having travelled and worked in many different countries, all types of world music have impacted her playing. During a ten hour snowy road trip to a classical concert in Yorkshire, Eliza and Jean discovered their mutual desire to play folk and world music. Donal immersed himself in songwriting and is writing with many leading artists of today. Tad was keen to work with different musicians, taking the bodhran out of the traditional Irish session into a new folk genre. The hybrid combination of these players brings a melting pot of creativity. Such different musical backgrounds makes for a fantastic mixture of new sounds and ideas. Quality contemporary songwriting enhanced by virtuosic instrumentals, vibrant rhythms and haunting melodies, all interlaced with vivid storytelling. Other inspiration includes Pink Floyd, Steve Reich, Peter Gabriel and Ennio Morricone.

How often do you hear a sound that’s completely new, which has great energy and immediately makes you want to dance? I’ll be following Ranagri around, I hope they don’t mind… Katie Derham, presenter BBC Proms and Radio 3
Echoes of Pentangle, Jethro Tull and new Celtic folk sounds – cemented by strong contemporary song-writing. Carl Corcoran, Presenter on RTE Lyric FM 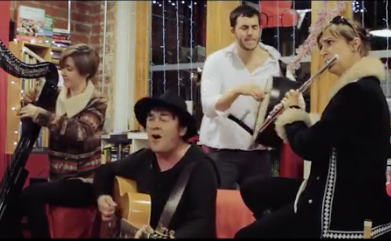